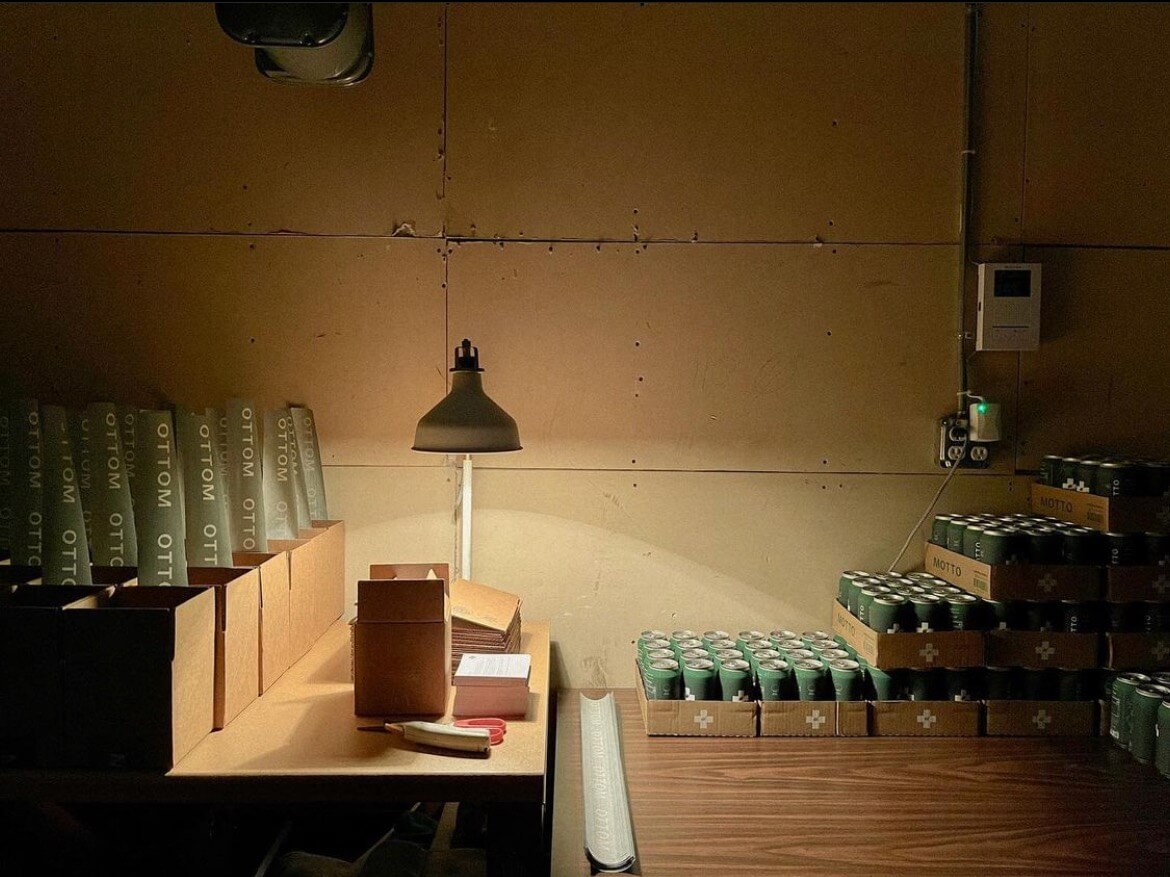 Tom: Motto is the future of soda.

Henry: Motto is soda made from plants.

How did Motto come to be?

Tom: Motto started as an accident. Ten years ago I started drinking matcha green tea, for health. One day I forgot to drink my tea hot and a few hours later I found it, cold, on my kitchen counter. It was a cold day outside. I wasn’t even thinking of drinking cold matcha, but for some reason I got out a cocktail shaker, got some ice, poured in the matcha, added some seltzer, honey, lemon juice. I shook it up. Took a sip. I wish I could say that I heard angels singing, but all I really did was to drink every drop. And then I called Henry. Ever since we’ve been making Motto and working on recipes.

Why did Motto come to be?

Tom: Motto started as a way to make matcha taste good. Let’s be honest: hot matcha is green chalk in a teacup. It’s an acquired taste. But when you take matcha and you mix it with just the right ingredients in just the right proportions and you serve it cold in a soda, it’s delicious. That’s why Motto came to be.

Henry: We’re taking one of the world’s healthiest ingredients — whole green tea leaves stone-ground into a powder — and making it taste really good.

Tom: Our ingredients set us apart. No white sugar. No high-fructose corn syrup. Nothing artificial. And our insistence on quality. The tea leaves, the lemons, the honey — we trace every ingredient to its source and we won’t compromise on quality or flavor. Also, Motto isn’t just a gut-health drink or a sports drink or an energy drink. It’s a whole-plant drink that’s good for the whole day and for the whole body.

Henry: Each day, people around the world drink 1.2 billion cans of conventional soda. Conventional soda isn’t good for you. That’s a fact. We think that if you’re going to drink a soda, you might as well drink a soda that helps you rather than hurts you.

How did Motto get its name?

Tom: “Motto” sounds good. It’s easy to pronounce. Also, Motto is a soda you can live by and live with, so Motto is true to its name.

Do you have a motto?

Tom: No. But if I did, it would probably be a quote attributed to Lao Tzu: “The way to do is to be.”

Henry: Not really. Nothing I’d tattoo on my forearm. I do like this line, though: “Only the serious is beautiful.”

What are your backgrounds?

Henry: I grew up in Virginia. Went to Bates College in Maine, then to law school at the University of Maine. Founded Motto with Tom before I graduated from law school, so I haven’t practiced law. It’s been all Motto, all the time.

Tom: Cooking. I like to design things and make things with my hands. I build boats. I live in Nantucket. I spend most of my time on the water or near the water.

Henry: I like to cook. Like to read. I try to play soccer three days a week but usually it’s two days. I live in Brooklyn. I wake up really early to play soccer.

Henry: A dozen oysters and a wedge of lemon.

Tom: The Mysterious Island by Jules Verne. It takes place on a desert island.

Henry: Buddenbrooks by Thomas Mann. There’s a lot to it. It can sustain you.

Tom: The one I’ve got with me.

What are you making for dinner tonight?

Henry: I don’t know. I’ll go to the grocery store and see what looks good.

What is your mission for Motto?

What are your dreams for Motto?

Henry: We want to see Motto in every shop, store, cafe, and refrigerator in the country. We want everyone to drink it and love it and feel good. I also want Motto to help reduce diabetes, obesity, and heart disease worldwide.

What are your dreams for yourself?

Tom:  To have fun. Work hard at something worth doing. Leave the world better than
I found it. Die old.